String is a generic term that stands for:

An empty string is specified by two quotation marks with nothing between them ("").

The following escape sequences can be used within strings:

Note: The \ (backslash) character is used as a separator in pathnames under Windows. You must therefore use a double backslash \\ in paths when you want to have a backslash in front of a character used in one of the escape sequences recognized by 4D (e.g. "C:\\MyDocuments\\New.txt").

(*) If the keyword "Mer" is associated with the picture stored in the picture expression (field or variable).

The 4D language supports @ as a wildcard character. This character can be used in any string comparison to match any number of characters. For example, the following expression is TRUE:

The wildcard character must be used within the second operand (the string on the right side) in order to match any number of characters. The following expression is FALSE, because the @ is considered only as a one character in the first operand:

The wildcard means "one or more characters or nothing". As seguintes expressões são TRUE:

On the other hand, whatever the case, a string comparison with two consecutive wildcards will always return FALSE. The following expression is FALSE:

When the comparison operator is or contains a < or > symbol, only comparison with a single wildcard located at the end of the operand is supported:

If you want to execute comparisons or queries using @ as a character (and not as a wildcard), you need to use the Character code(At sign) instruction. Imagine, for example, that you want to know if a string ends with the @ character. The following expression (if $vsValue is not empty) is always TRUE:

The following expression will be evaluated correctly:

Note: A 4D option in the Design environment allows you to define how the @ character is interpreted when it is included in a character string.

Unlike other string comparisons, searching by keywords looks for "words" in "texts": words are considered both individually and as a whole. The % operator always returns False if the query concerns several words or only part of a word (for example, a syllable). The “words” are character strings surrounded by “separators,” which are spaces and punctuation characters and dashes. An apostrophe, like in “Today's”, is usually considered as part of the word, but will be ignored in certain cases (see the rules below). Numbers can be searched for because they are evaluated as a whole (including decimal symbols). Other symbols (currency, temperature, and so on) will be ignored.

These symbols are used to refer to a single character within a string. This syntax allows you to individually address the characters of a text variable, string variable, or field.

If the character reference symbols appear on the left side of the assignment operator (:=), a character is assigned to the referenced position in the string. For example, if vsName is not an empty string, the following line sets the first character of vsName to uppercase:

Otherwise, if the character reference symbols appear within an expression, they return the character (to which they refer) as a 1-character string. Por exemplo: 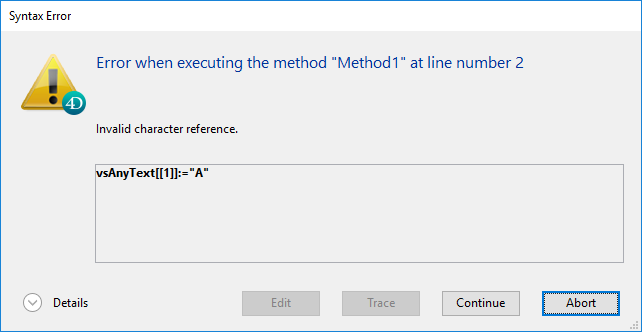 The following project method capitalizes the first character of each word of the text received as parameter and returns the resulting capitalized text:

For example, the line: