A datastore exposed on a 4D application can be accessed simultaneously through different clients:

A session in created on the remote datastore to handle the connection. This session is identified using a internal session ID which is associated to the localID on the 4D application side. This session automatically manages access to data, entity selections, or entities.

The localID is local to the machine that connects to the remote datastore, which means:

These principles are illustrated in the following graphics: 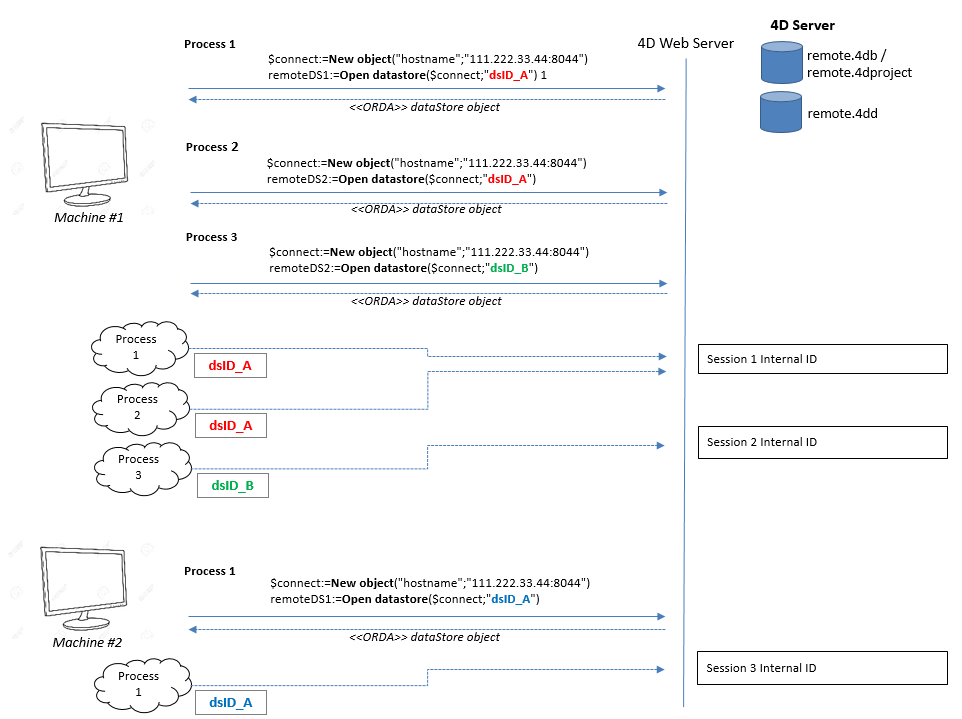 For sessions opened by REST requests, please refer to Users and sessions.

Processes that manage sessions for datastore access are shown in the 4D Server administration window:

In the following example, two processes are running for the same session: 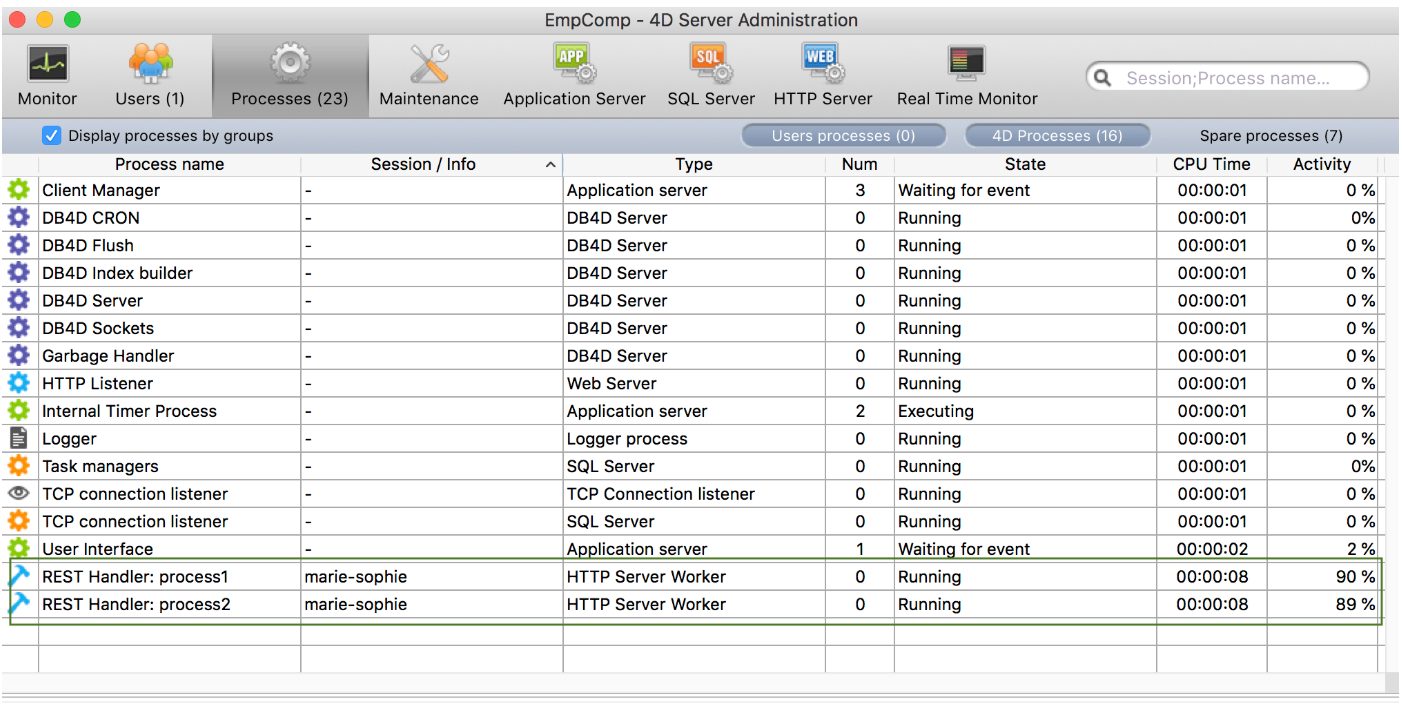 ORDA features related to entity locking and transaction are managed at process level in remote datastores, just like in ORDA client/server mode:

A session is automatically closed by 4D when there has been no activity during its timeout period. The default timeout is 60 mn, but this value can be modified using the connectionInfo parameter of the Open datastore command.

If a request is sent to the remote datastore after the session has been closed, it is automatically re-created if possible (license available, server not stopped...). However, keep in mind that the context of the session regarding locks and transactions is lost (see above).

4D provides optimizations for ORDA requests that use entity selections or load entities in client/server configurations (datastore accessed remotely through ds or via Open datastore). These optimizations speed up the execution of your 4D application by reducing drastically the volume of information transmitted over the network. They include:

The optimization context is based upon the following implementations: 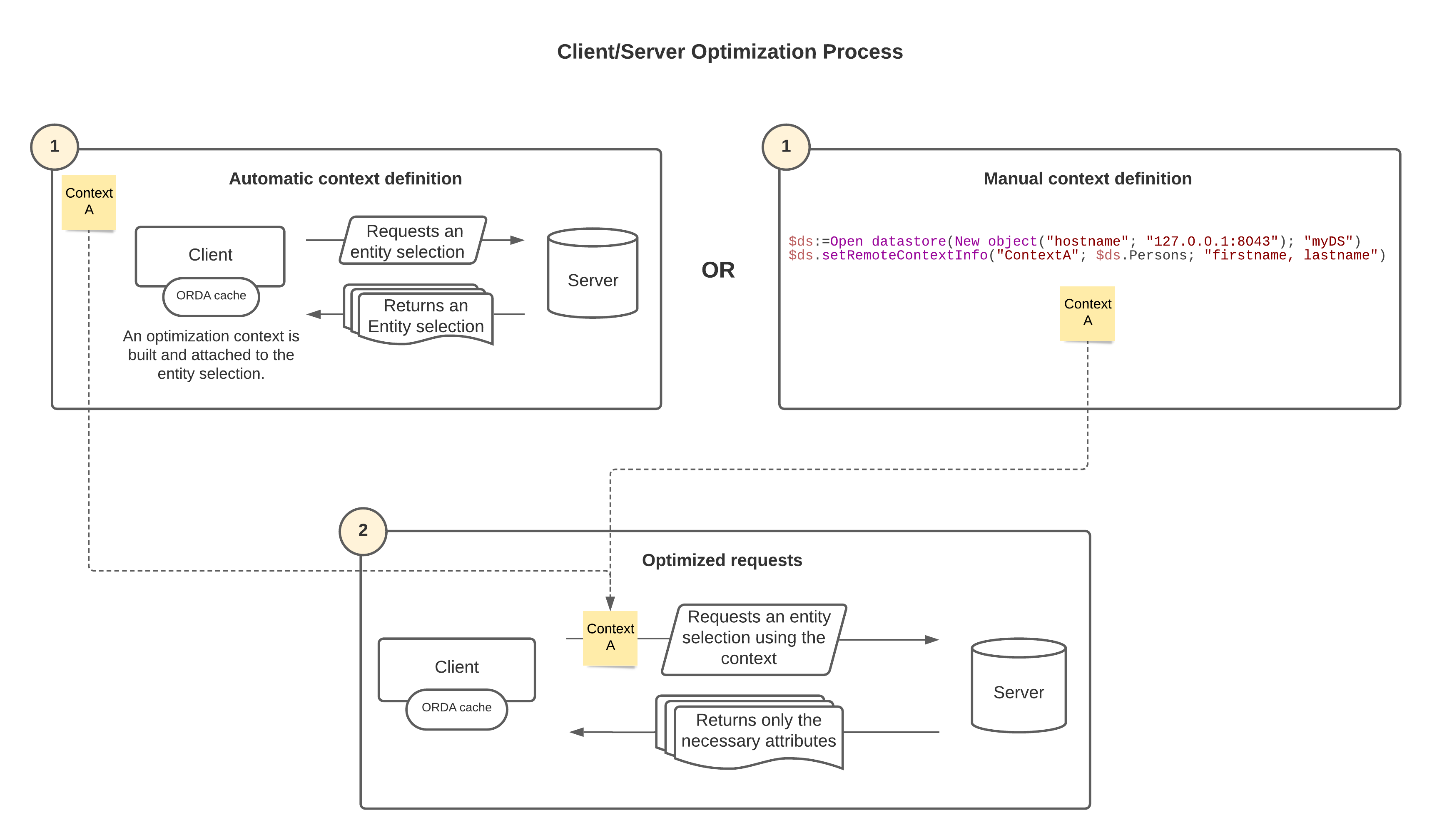 Given the following code:

Thanks to the optimization, this request will only get data from used attributes (firstname, lastname, employer, employer.name) in $sel from the second iteration of the loop.

You can also create contexts using the .setRemoteContextInfo() function.

All ORDA functions that handle entity selections support the context property (for example dataClass.query() or dataClass.all()). The same optimization context property can be passed to unlimited number of entity selections on the same dataclass. Keep in mind, however, that a context is automatically updated when new attributes are used in other parts of the code. Reusing the same context in different codes could result in overloading the context and then, reduce its efficiency.

A similar mechanism is implemented for entities that are loaded, so that only used attributes are requested (see the dataClass.get() function).

Entity selection optimization is automatically applied to entity selection-based list boxes in client/server configurations, when displaying and scrolling a list box content: only the attributes displayed in the list box are requested from the server.

A specific "page mode" context is also provided when loading the current entity through the Current item property expression of the list box (see Collection or entity selection type list boxes). This feature allows you to not overload the list box initial context in this case, especially if the "page" requests additional attributes. Note that only the use of Current item expression will create/use the page context (access through entitySelection\[index] will alter the entity selection context).

Subsequent requests to server sent by entity browsing functions will also support this optimization. The following functions automatically associate the optimization context of the source entity to the returned entity:

For example, the following code loads the selected entity and allows browsing in the entity selection. Entities are loaded in a separate context and the list box initial context is left untouched:

An optimization context should be defined for every feature or algorithm of your application, in order to have the best performances. For example, a context can be used for queries on customers, another context for queries on products, etc.

If you want to deliver final applications with the highest level of optimization, you can preconfigure your contexts and thus save learning phases by following these steps:

For optimization reasons, data requested from the server via ORDA is loaded in the ORDA remote cache (which is different from the 4D cache). The ORDA cache is organized by dataclass, and expires after 30 seconds.

The data contained in the cache is considered as expired when the timeout is reached. Any access to expired data will send a request to the server. Expired data remains in the cache until space is needed.

By default, the ORDA cache is transparently handled by 4D. However, you can control its contents using the following ORDA class functions: