The standard object library is available from the Form editor: click on the last button of the toolbar:


The library is displayed in a separate window: 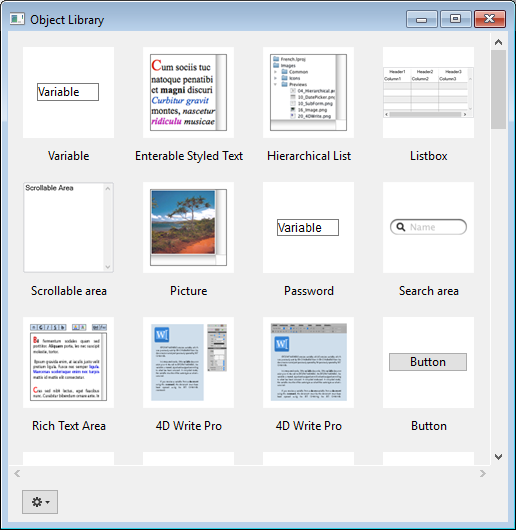 The window has the following main features:

This library is read-only. If you want to edit default objects or create your own library of preconfigured objects or project forms, you need to create a custom object library (see below).

All objects proposed in the standard object library are described on this section on doc.4d.com.

Objects are stored with all their properties, including their object methods. Libraries are put together and used by simple drag-and-drop or copy-paste operations.

To create an object library, select New>Object Library... from the 4D File menu or tool bar. A standard save file dialog box appears, which allows you to choose the name and the location of the object library.

Once you validate the dialog box, 4D creates a new object library on your disk and displays its window (empty by default).

You can create as many libraries as desired per project. A library created and built under macOS can be used under Windows and vice-versa.

A given object library can only be opened by one project at a time. However, several different libraries can be opened in the same project.

To open a custom object library, select Open>Object Library... command in the 4D File menu or tool bar. A standard open file dialog box appears, which allows you to select the object library to open. You can select the following file types:

In fact, custom object libraries are regular 4D projects. Only the following parts of a project are exposed when it is opened as library:

Objects are placed in an object library using drag-and-drop or a cut-copy-paste operation. They can come from either a form or another object library (including the standard library). No link is kept with the original object: if the original is modified, the copied object is not affected.

In order to be able to drag and drop objects from forms to object libraries, you must make sure the Start drag and drop option in the 4D Preferences is selected.

Basic operations are available in the context menu or the options menu of the window:

You can place individual objects (including subforms) or sets of objects in an object library. Each object or set is grouped into a single item: 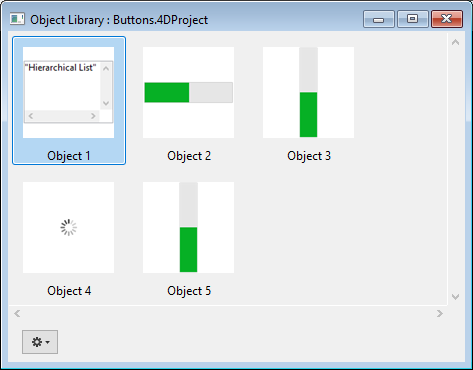 Objects are copied with all their properties, both graphic and functional, including their methods. These properties are kept in full when the item is copied into a form or another library.

The following is a list of dependent objects that will be pasted into the library at the same time as the main object that uses them (when applicable):