4D Desktop applications can be used in a Client/Server configuration, either as merged client/server applications or as remote projects.

Connecting to a remote project from the same machine as 4D Server allows modifying the project files. This specific feature allows to develop a client/server application in the same context as the deployment context.

A merged client/server application is customized and its starting is simplified:

These principles are detailed in the Build Application page.

The first time you connect to a 4D Server project via a remote 4D, you will usually use the standard connection dialog. Thereafter, you will be able to connect directly using the Open Recent Projects menu or a 4DLink shortcut file.

To connect remotely to a 4D Server project:

If 4D Server is connected to the same network as the remote 4D, select Available. 4D Server includes a built-in TCP/IP broadcasting system that, by default, publishes the name of the 4D Server projects available over the network. The list is sorted by order of appearance and updated dynamically. 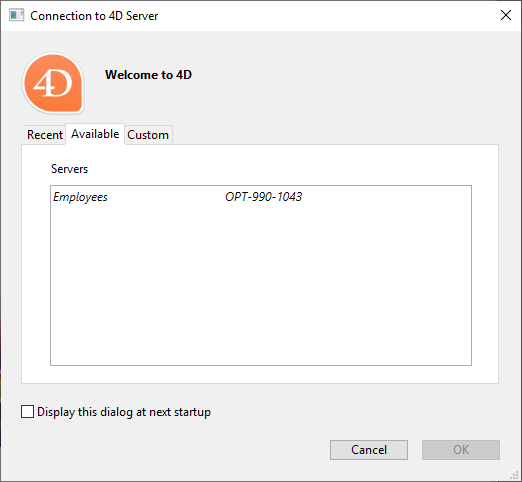 To connect to a server from the list, double-click on its name or select it and click the OK button.

A circumflex accent (^) is placed before the name of projects published with the encryption option enabled.

If the published project is not displayed in the Available list, select Custom. The Custom page allows you to connect to a published server on the network using its network address and assigning it a customized name. 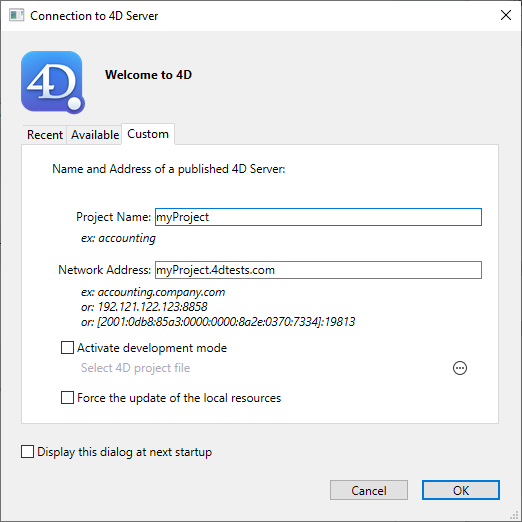 The Activate development mode option opens the remote connection in a special read/write mode and requires to access the project folder from the remote 4D (compatibility option).

Once this page assigns a server, clicking the OK button will allow you to connect to the server.

Once a connection to the server has been established, the remote project will be listed on the Recent tab.

Updating project files on the server​

4D Server automatically creates and sends the remote machines a .4dz version of the .4DProject project file (not compressed) in interpreted mode.

When an updated .4dz version of the project has been produced on 4D Server, connected remote 4D machines must log out and reconnect to 4D Server in order to benefit from the updated version.

Using 4D and 4D Server on the same machine​

When 4D connects to a 4D Server on the same machine, the application behaves as 4D in single user mode and the design environment allows you to edit project files. This feature allows you to develop a client/server application in the same context as the deployment context.

When 4D connects to a 4D Server on the same machine, the development mode is automatically activated, whatever the opening option status.

Each time 4D performs a Save all action from the design environment (explicitly from File menu or implicitly by switching to application mode for example), 4D Server synchronously reloads project files. 4D waits for 4D Server to finish reloading the project files before it continues.

However, you need to pay attention to the following behavior differences compared to standard project architecture:

It is not recommended to install plug-ins or components at the 4D or 4D Server application level.